Michelle Dockery plays Lady Mary Crawley in Downton Abbey. She earned an Olivier Award nomination for Best Supporting Actress for her stage performance in Burnt by the Sun and she has also appeared in the films Hanna, Anna Karenina and Non-Stop…

Q: How did you feel on your last day on set?

It was terribly emotional and I felt sick leading up to that final take, anticipating those words, ‘And that’s a wrap,’ after six years. It was such a mixture of emotion. My last scene I was below stairs, which was really poignant for me. I was with Jim Carter (Mr. Carson), Phyllis Logan (Mrs. Hughes) and Hugh Bonneville (Earl of Grantham). It was such a lovely way to end it, particularly with Jim. I liked it that Mary and Carson had their final moment together.

Q: Are you as fashion conscious as Lady Mary?

I don’t know. I think that she is fashionable but I don’t think she’s obsessed. She is not going as far as maybe Rose (Lily James) does. Rose was very ‘flapper’ and Mary is a little bit more mature than that. Personally, I take note of fashion and I like seeing what is out there in the new collections. I guess we are about the same. I like a lot of what we see in Season 6. There are lots of pearls, a lot of Chanel influence, and fabulous hats this year. I get to wear some really great hats and I do at one stage wear sunglasses, which was very risqué, very new.

Q: Will you miss the costumes?

I will miss them. I really will. They are just beautiful, particularly this year. They have really pulled out all the stops for the last series and I don’t think I’d ever tire of wearing the clothes and the jewellery.

Q: Did you know a lot about fashion anyway?

No. I have learned generally as the show has gone on. I wasn’t really into fashion when we first started the show. I loved clothes but having a sense of style and knowing about designers wasn’t really something that I’d had the opportunity to learn about. But then, of course, you are doing photo shoots every few months and you are meeting new stylists and different designers and it’s been a bit of an education in the fashion world, which I have found really fun.

Yes. It is something that in the beginning can be a little bit overwhelming. You are not quite sure how to be and you learn as you go along that it’s not about what you want to wear. It’s about what they want on the cover and so you learn to be a little bit more adaptable. Actually, you realise that you are playing a character. I did this great shoot with Interview Magazine and they wanted me to look a bit like Jean Shrimpton but also working class, so it had that kind of contrast. That was so cool. It was such a different character and sometimes a casting director or a producer can see that image and say, ‘Actually, maybe she can play this role,’ because they see you in a different light. That is the way I look at shoots now. I think of it as an opportunity to try out something different, and it is just good fun.

Q: Do you feel the show has spoiled you in some way, because Julian Fellowes’ (Creator) writing is so wonderful?

We have been so spoiled and it has been the most incredible thing to be part of. And the writing is where it’s at. If I read a script and I am hooked by the first two pages, I know it is something I want to do. It is all in the writing, really. That’s where you begin. That is the foundation.

Q: Have you ever had aspirations in that field?

A: I am not a writer. No. It is something I have never thought about. Directing maybe. Not yet, but maybe some time in the future. I would love to have a go at directing.

Q: You’re staying in this world doing Les Liaisons Dangereuses on stage. That must be exciting?

A: Absolutely. Going back on stage was something I was looking for. I met Josie Rourke [artistic director of the Donmar Warehouse] and I love her. I think she is a fantastic director. It was the opportunity I was looking for. It was great because I wanted to get back on stage and oil my joints a bit. It is Mary’s world, really, but a very different character. Like I was saying, it was more about the writing than the genre. I am not out to prove to anyone that I can do something different from Mary. It is more about the material than anything. I just want to keep acting and I don’t really care where that is. I am doing a film after this, and then a pilot for television and then a play. I am doing three different areas in the acting world. It is all about the parts and the writing.

Q: What was one of the most memorable scenes from your time on Downton?

A: It was being at the train station with Matthew in Series Two. That was a really special scene, and the proposal at the end of that series. There are many scenes — with Maggie [Smith], scenes with Jim [Carter], scenes with Laura [Carmichael], I love them all.

Q: Was there one particular moment when you realized how big this show was?

A: The first ever moment was a week or two after the first episode was aired. It was Sunday morning and I went to my local newsagents to get a pint of milk and on the cover of three newspapers were the three sisters, me, Laura [Carmichael] and Jess [Brown-Findlay]. I had only gone in to buy a pint of milk. I could not believe it. That was a big, big moment. From then on it just kind of grew and grew. Suddenly, I was in New York being recognized by people and there have been some real pinch yourself moments as the years have gone on.

Q: Is there much that you’ve learned from Downton? Could you ride beforehand, for example?

A: To be honest, the whole thing has been an education. As Laura said the other day, it is like we are graduating in a way. I had worked before Downton. I had been working for six years before I got cast. But working with the likes of Maggie Smith and Penelope Wilton, watching them work, working alongside them, has been an education. And then it has also been like a history lesson on the period. I have learnt to ride and I have learnt about the fashion of the era and the style. Also, I found interviews very difficult at first. I was terrified because it was new to me and I was worrying about everything I said. As the years have gone on I’ve got used to it. In the end, you are telling a story. It is telling a story and I think that’s what is remarkable about Julian — that Downton is one story but it is 18 to 23 different stories all interweaving at the same time. He has such a talent.

Q: Is there anything that you won’t miss?

A: Those cold mornings at Highclere Castle, maybe! It is like a wind tunnel around that house.

Q: Were you on set during Season 6 for the royal visit with the Duchess of Cambridge?

A: Yes, I was on set. It was one of the most magical days. The excitement and the anticipation leading up to the moment she stepped on set was amazing. The producers brought back people who had previously worked on the show so that they could meet her. And she met every single crewmember. She is so gorgeous. Her presence was beautiful. She walked on set and though she is a princess, at the same time she was so friendly. I have been privileged enough to get to know her sister and her brother and they are such a lovely family.

Q: I hear that the Duchess of Cambridge quite into fashion…

A: She talked extensively to Anna Robbins, our costume designer, because she has an Art History degree so that was the bit she was interested in. She talked to Anna a lot about the costumes. But it is lovely seeing people’s reaction when they come on to set. Even the Duchess Of Cambridge, you could see how in awe she was with what she was seeing. It was a lovely thing to see how she reacted. It was the most exciting day we had on set. 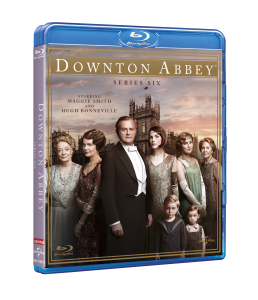 Written By
Becky
More from Becky
This Mother’s Day it’s all about reminding Mums how special and appreciated...
Read More