The 1980s was an era when commuters championed the suit and sneaker look. This led to an explosion of joggers wearing neon colours, pounding the streets to post-punk indie music and the emerging wave of electronic beats. Onitsuka Tiger was the brand that pioneered performance running shoes. This spirit is woven into its AW13 collection featuring a new design and an updated retro runner.

Onitsuka Tiger AW13 styles are crafted from modern materials and fabrics, bathed in bright colours inspired by Japan’s urban landscape, and brought to life in a brand campaign entitled ‘My Town My Tracks’.

The centrepiece of this season’s collection is HARANDIA – a new direction for Onitsuka Tiger – built from the ground up to feature performance technology in a shoe for everyday wear.

The brand’s running collection takes a giant leap forward with a fresh, yet classic shape. The asymmetric toe front and irregular lace area gives it a distinctive silhouette, which marries Onitsuka Tiger’s heritage with modern materials.

HARANDIA’s signature design is crafted from black and tan suede, but is available in eight bright and neutral alternatives, with some styles in nylon.

In another first, HARANDIA is guaranteed its place in sneaker history because it is the first to have Onitsuka Tiger written in Japanese on its sole.

ULT-RACER is a modern interpretation of the ULTIMATE 81, one of Onitsuka Tiger’s most famous 1980s running shoes, originally crafted for lightness and stability.

The monosock upper emphasises the shoe’s sleek style, while a chunky sole, combined with a mix of SoLyte midsole and herringbone rubber pattern give it a light and comfortable feel.

ULT-RACER comes in nylon; its key colour is white, blue and green, but it is available in seven combinations, plus three female fits.
The collection is brought to life by an online, print and retail campaign entitled ‘My Town My Tracks,’ a visual journey that interlinks impressions of the new models through the eyes of three people who live in usually unseen backstreets of Tokyo.

British photographer Laurence Ellis captures the stories of three captivating individuals pursuing their dreams in Tokyo: Asami, a barista and actress, Que, an artist and Chris, a young entrepreneur.

Showcasing models from the upcoming, running-inspired collection, the three characters lace up their sneakers and take us on a lap of discovery around their local tracks, revealing contemporary Japan through their own lens.

1,000 candid Instagram photos depict contemporary Japan in locations unknown to most visitors. Speaking in Japanese, the ambassadors introduce themselves in films shot in their neighbourhoods. Three ‘introductory’ and three ‘journey’ films detail inspiring locations such as a second-hand boutique, a peaceful park and a busy bicycle workshop.

Lisa Hogg, Onitsuka Tiger’s head of brand management, said: “Pioneering style, performance and heritage, Onitsuka Tiger takes its cue from contemporary Japan for the new season. The HARANDIA is a first on many levels while the ULT-RACER captures the retro runner trend, with Onitsuka Tiger’s dedication to detail and energetic signature.”

Onitsuka Tiger was established in Japan in 1949 and has since created footwear and clothing inspired by Japanese values of craftsmanship and attention to detail. With heritage built into the design of each product, along with added modernity, the brand offers a wide range of styles for those who value their individuality. Onitsuka Tiger creates products for people who demand something above and beyond mainstream sports brands.

In addition to footwear, Onitsuka Tiger has a new ‘Back to Basics’ collection for this season featuring men’s T-shirts, polo shirts, hoodies, jackets and track pants in a variety of designs and colours. 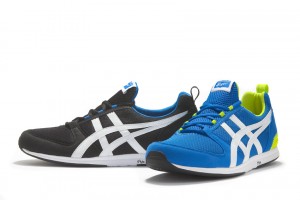 I recently tried the Onitsuka Tiger collection for myself and was pleasantly surprised by the results. These shoes are comfortable, durable and the bright, eye catching colours make them fashionable for summer and A/W 2013 wear. They look great when paired with casual jeans and a skinny t-shirt and make the perfect every-day footwear solution.

In 1949, Kihachiro Onitsuka established Onitsuka Tiger, the forerunner of ASICS. It began with a commitment to promoting youth health, and has gone on to play a part in most major Olympic games. The famous Tiger stripes are synonymous with sporting triumph. The legend lives on today in the fusion of Japanese heritage and contemporary design. The spirit of Onitsuka Tiger is reflected in each collection of unique sneakers, apparel and accessories. www.onitsukatiger.com

Written By
Becky
More from Becky
While we can’t get out to the gym right now, there have...
Read More