On 24 November 2020, the book “The 100 Prosecco Recipes” by Sandro Bottega was published in English version. The 192-page book, published by Mondadori, is a journey through the Prosecco hills, a Unesco World Heritage Site (Italy, Veneto Region, 50 km north of Venice), where tradition, research and authenticity come together in the name of taste. This is a collection of recipes, from aperitifs to desserts, accompanied by many stories and curiosities.

The culinary tradition of this area has been able to combine what nature spontaneously offers with the products of agriculture and animal husbandry, giving life to a creative cuisine made up of combinations and contaminations of flavours and fragrances and new cooking methods, always in the name of simplicity and genuineness. Proud of his land’s food and wine, landscape, technology and artistic heritage, Sandro Bottega wanted to pay homage to the straightforward, hard-working people who live there and who have created and preserve its culture. 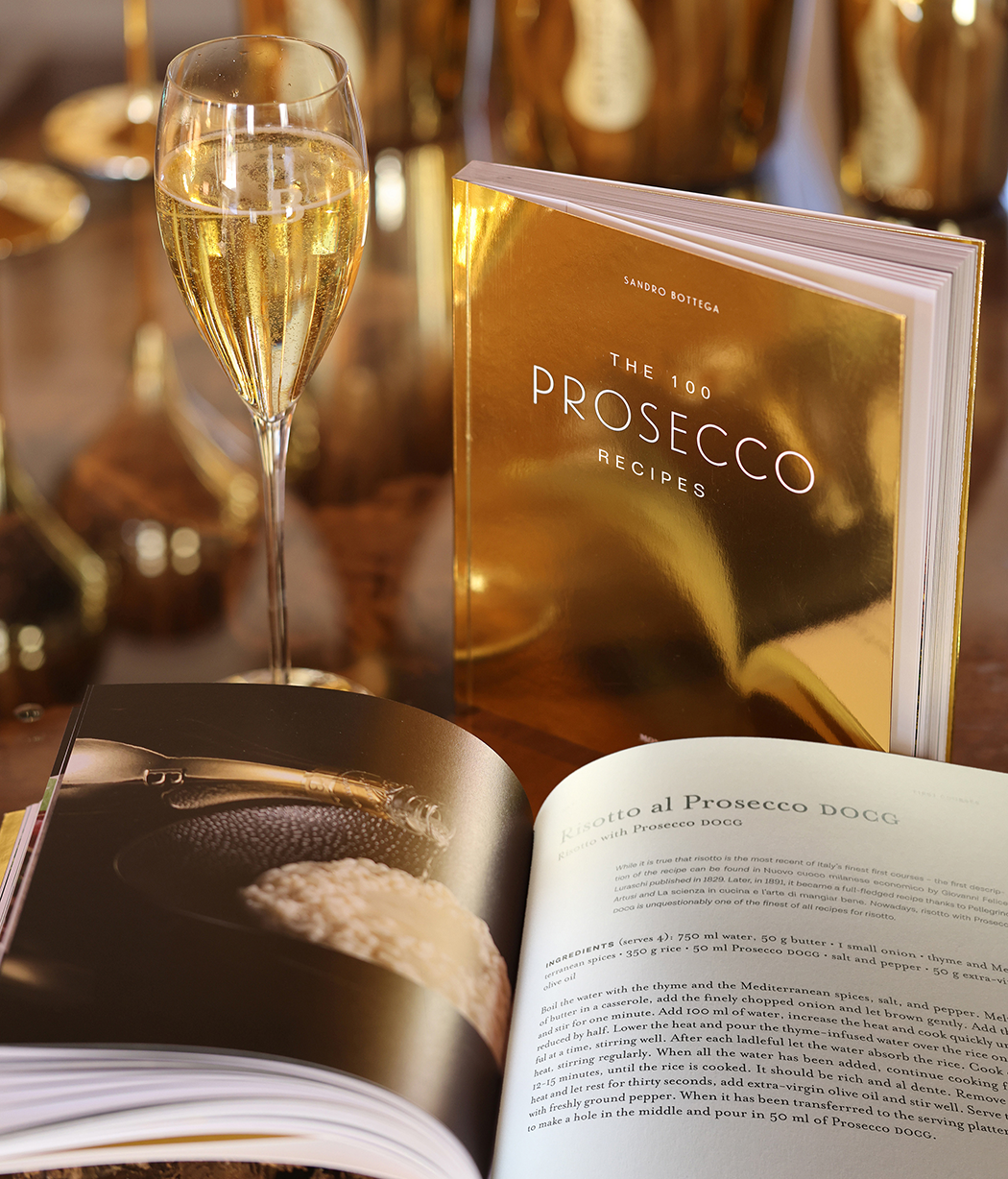 Sandro Bottega was born in 1963 and from an early age followed in his father’s footsteps, working in the family distillery. When his father died at the age of 19, he left his university studies and began to run the small family business himself, transforming it in just a few years, together with his mother and brothers, into one of the leaders in the grappa and prosecco market. While working incessantly and travelling equally, he cultivated his passion for culture and food and wine. After writing 6 books on the subject, he opened 20 restaurants around the world, which he calls Bottega Prosecco Bar, dedicated to both Veneto and Italian cuisine. He is passionate about authenticity, nature and technique, especially in relation to his own territory, where for 4 centuries his ancestors have cultivated land and produced wine.

The Bottega company, run by Barbara, Sandro and Stefano Bottega, is both a winery and a distillery. Founded in 1977 by Aldo Bottega under the name Distilleria Bottega, the company is based in Bibano di Godega (TV), 50 km north of Venice, where it produces grappas, wines and liqueurs aimed at a high and medium-high level target.

Its grappas, marketed under the Alexander and Bottega brands, include fine selections of single-variety grapes and distillates matured in barriques.

The range of Bottega wines includes Prosecco, including the well-known Bottega Gold, and other sparkling wines with great personality. Amarone, Ripasso, Brunello di Montalcino and other great reds are produced in the two separate cellars in Valgatara (Valpolicella) and Montalcino.

Bottega’s offer is completed by the Creams & Liquors line, which includes a wide range of fruit and cream liqueurs, including Limoncino, Gianduia, Fiordilatte and Pistachio. The company, which in 2013 became Bottega S.p.A., distributes its products in 140 countries worldwide.

The decorations are up, the pumpkins are out and costumes are at the ready: Halloween has crept up on us again. And with just…