Hi Theo James – Working with the same people on set for this second film, Insurgent, does being around people you know make it easier or harder?

On the one hand it makes it much easier because it’s more relaxed. On the other you have to make sure you don’t become lazy or complacent because it can be a bit like, oh we know what we’re doing, no problem. You have to keep reminding yourselves to be on your toes. On Divergent we didn’t really know each other so there was still that feeling of wanting to make a good impression.

What was it like working with Shailene Woodley again this time?

She’s great. One thing Shai and I found is that when you come back after a year and at first you think it’s fine because we’ve done these characters, it’s all good, then you get on set and you do that first scene and it’s like oh. It doesn’t just come back, you’ve got to click into gear.

Do you feel that there is there less or more pressure with this second movie?

So the plan was to make this movie even stronger and do you think you’ve managed it?

We all definitely wanted to up the game. One thing I am pleased with is that it’s more adult even than the first one. I think that’s very important because audiences are more and more sophisticated, especially young people, so you can’t dumb anything down or they see through it.

Fiction for young adults is massively successful now. What did you read when you were that age?

The Hobbit. YA fiction didn’t really exist when I was that age. When I was younger I read Hardy Boys or The Famous Five. I remember reading a whole series of ghoul and ghost stories when I was about 10. But then it was The Hobbit, Lord of the Rings and then on to books for adults.

Millions of fans of Veronica Roth’s books know everything that there is to know about the characters and they are hugely invested in these stories. Are you aware of that when you’re playing Four?

You definitely don’t want to mess it up. I think it’s great that there are so many people reading, but really when you’re doing a film that’s an adaptation of a book you do the preparation and then you know the character and you decide on how you’re going to play it and that’s it. You can’t be too informed by other people.

In some ways yes, and in some ways no. The job is what I expected it to be in a good way – it’s very gratifying and it’s challenging. Getting into a part is really fun – you have to go quite deep and there’s a lot of research to be done.

What is the more difficult part of being an actor?

To be honest, one thing that’s tricker is what’s happening now with how connected we are globally is the blurring of the lines between being an actor as your job and being a celebrity. That is tricky. Some people embrace it, some people like and props to them if it works for them. But it can be a bit difficult because at the end of the day all this other stuff is irrelevant, acting is my job. You never want to perceive yourself through anyone else’s eyes and whether that’s the media of a social thing, or someone coming up to you in a bar. You want to maintain the fact that it’s a job, that’s what it is.

But as you become more recognisable and better known, does that kind of attention change you?

I’m still the same person so it hasn’t really changed me. It’s not like I go to trendy parties, that’s not particularly my thing, not that there’s anything wrong with it. So I don’t think it needs to change you unless you want it to. Unless you’re Brad Pitt and then you definitely can’t go to Costa coffee to pick up a frappucino.

You are from a completely non showbiz family and you are the youngest of five. What do they make of your career and do they help to keep your feet on the ground?

Family is very important to all of us. We’re a jokingly cynical family. I remember my eldest brother, the first time I wrote a song and played it to him. I was 13 and I had written this really cheesy song that I wanted to sing. I sat him down and I had my guitar and I just opened my heart. I finished the song which was terrible, and he just burst out laughing. He still takes the piss out of me now, he calls it ‘Why?’ because it was all about why do I feel these things  or something like that. You can’t take this stuff too seriously. If you start taking yourself or it too seriously I think it can be damaging.

INSURGENT IS AVAILABLE ON BLU-RAY AND DVD ON 3RD AUGUST 2015, COURTESY OF ENTERTAINMENT ONE. Many thanks to Theo James for his time. 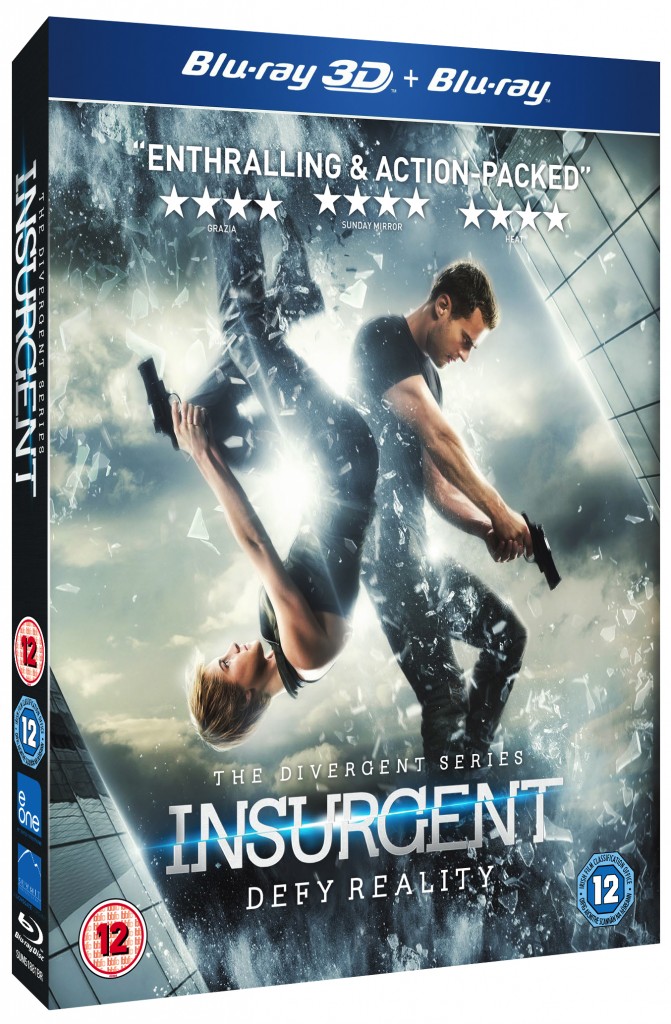 We have already been treated to a fantastic April Glossybox which you can find out more about here, but that’s not all for this…