Jersey Royal new potatoes are now in season and these delicious, earthy and nutty spuds are one of the traditional foodie signals that Spring has well and truly sprung. This week I’ve been obsessed with making quick and easy meals that are healthy and nutritional, but don’t compromise on taste. As part of my journey towards cutting down on meat and living a more vegan/vegetarian diet I’ve been enjoying finding tasty and versatile ingredients to cook with. 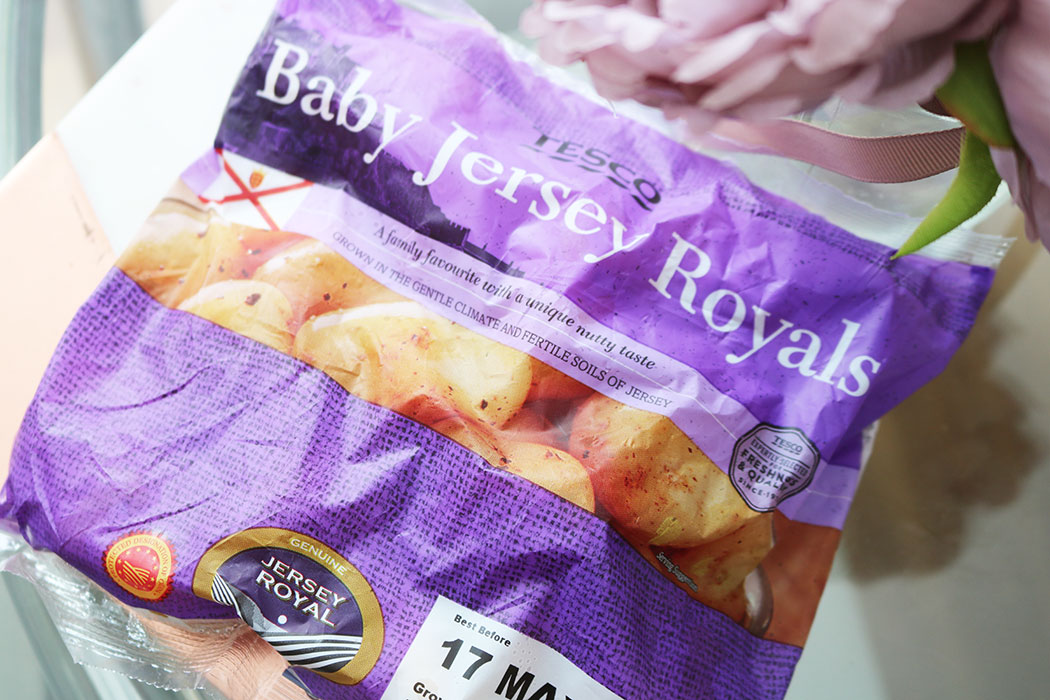 This season Jersey Royals have been delayed due to the severe cold weather conditions which have affected the UK and uncharacteristically Jersey itself, but fear not – they are finally here! Jersey Royals are still produced and harvested using many traditional practices such as planting the seed potatoes by hand, fertilising the potatoes using seaweed harvested from Jersey beaches and harvesting from the islands steep slopes using winch and cables.

These delicious little potatoes are delivered direct from Jersey and are distinctive by their kidney shape, waxy texture and delicate skins. The Jersey Royal new Potato is also the only potato that carries the EU Protected Designation of Origin mark of authenticity, like Cornish clotted cream, champagne or Stilton cheese. 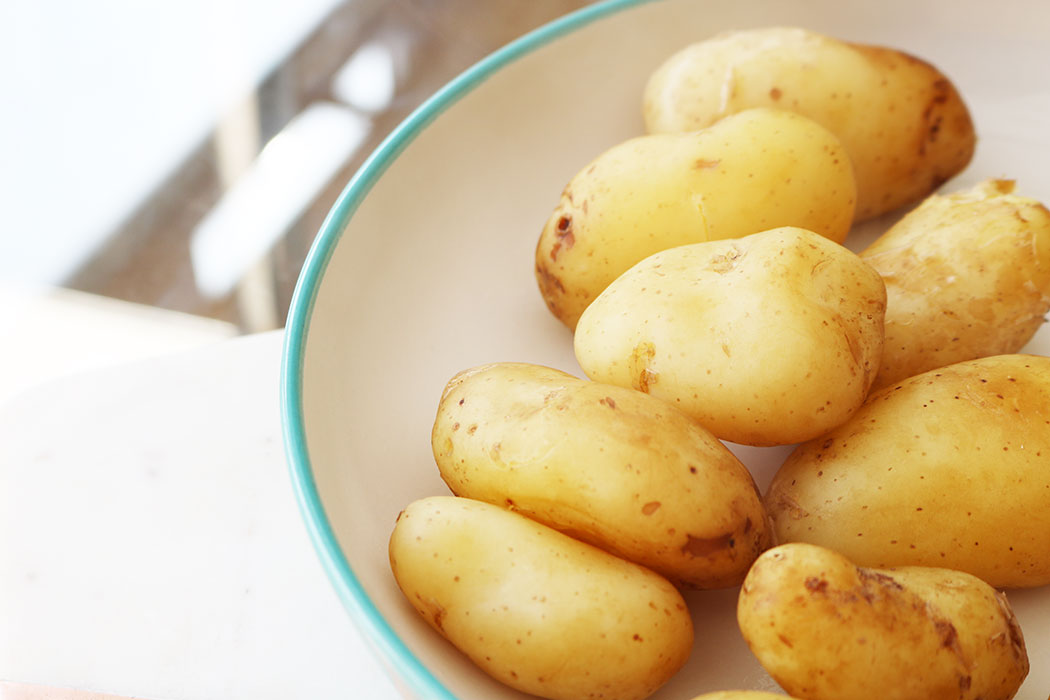 A dish I’ve been making a lot lately, and one that is made so much more delicious by adding Jersey Royal new potatoes, is a veggie potato curry that takes just minutes to throw together. The finished dish is a healthy, well balanced meal that you can pop into the fridge and use as lunch for a good few days. Here’s how to make it: 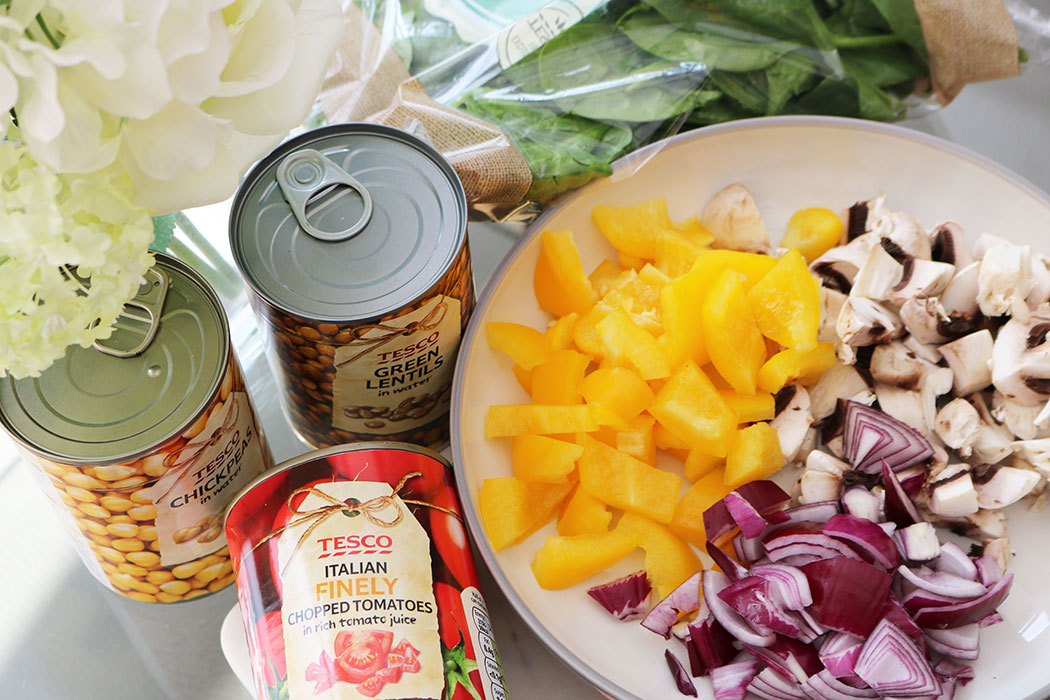 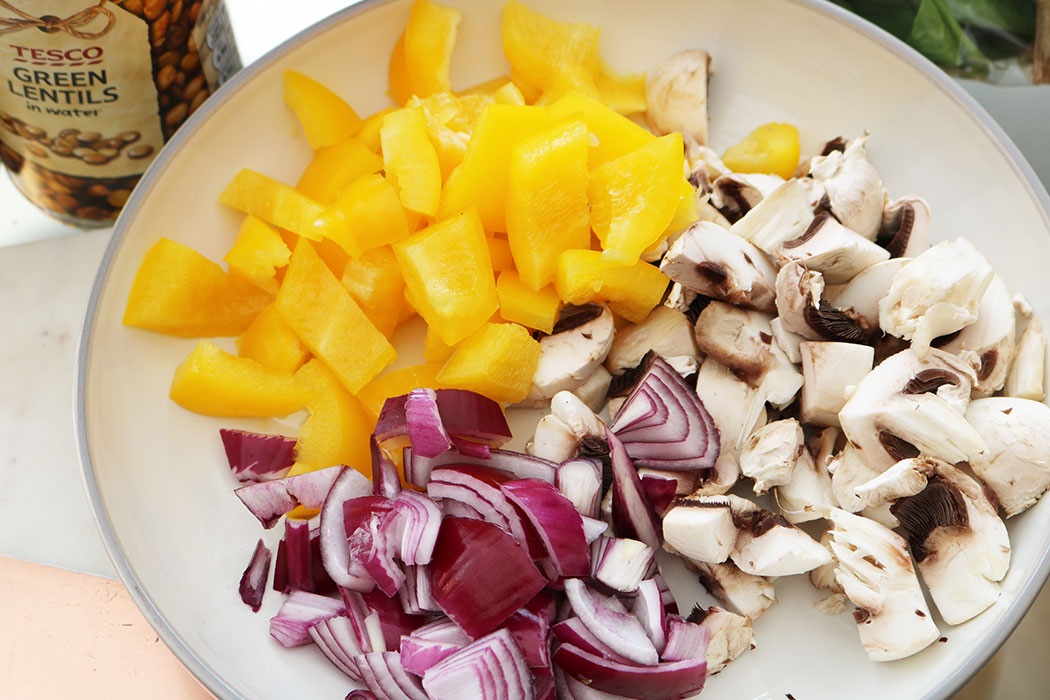 Method: The first thing you’ll want to do is cook your new potatoes. Boil or steam them until soft. Once cooked and cooled slightly you can slice these into chunks and then set them aside as you will need these later. The soft, waxy texture of Tesco Jersey Royal new potatoes makes them perfect for this dish as they wont crumble or disintegrate into your meal. 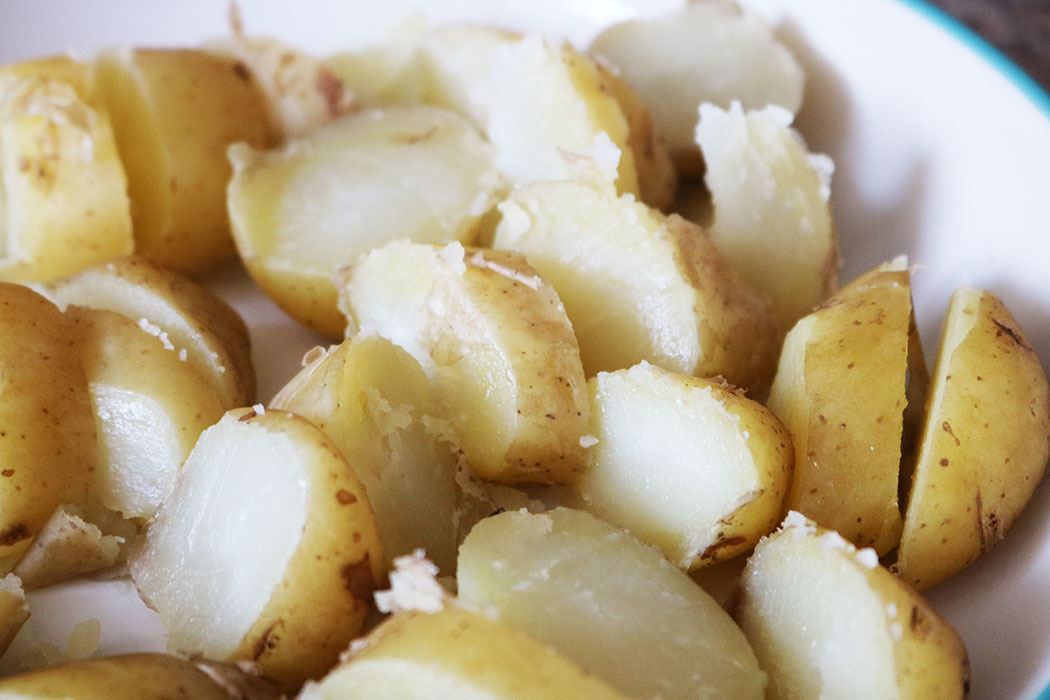 Next, roughly chop your onion, pepper and mushrooms. Heat a little water in a wok (just enough to cover the bottom of the pan, as this will substitute the need for cooking with oil) until boiling point and cook off your veggies in this. Place a lid over the top to speed up the process. Cook for around 5 minutes or until softened. 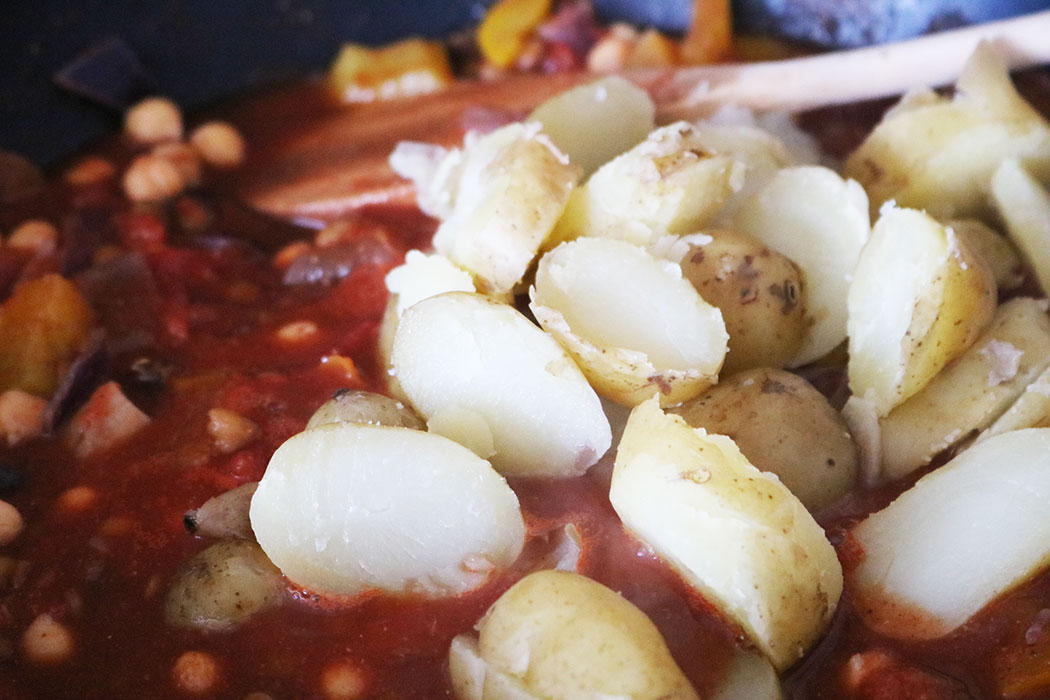 Drain your chick peas and green lentils and add these into the pan with the veggies. Then add your tinned tomatoes and all of your seasoning and garlic granules. You can adjust the spice levels to suit your own personal taste. If you like your food spicy, add more of the chilli powder. Give the mixture a good stir and then add in all of your cooked Jersey Royal new potatoes, before stirring again. 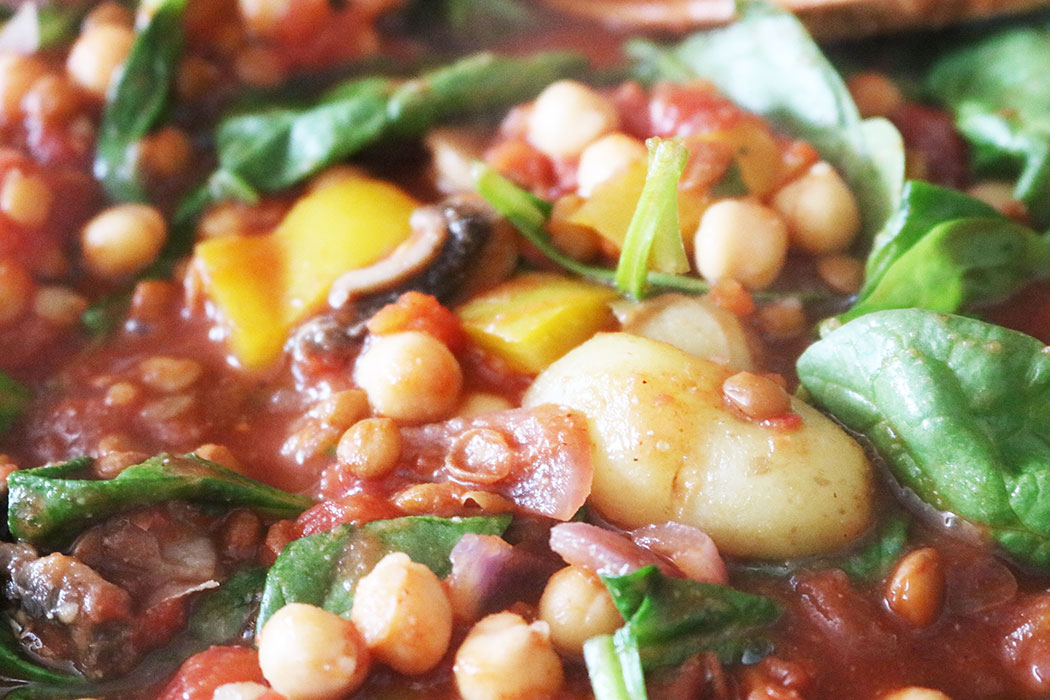 Leave the mixture to cook for another 10-15 minutes on a low heat. For the final minute or so of cooking, you can grab a handful of your spinach and run this through the mixture, giving it just enough time to wilt down and perfectly merge with the rest of your ingredients and flavours. 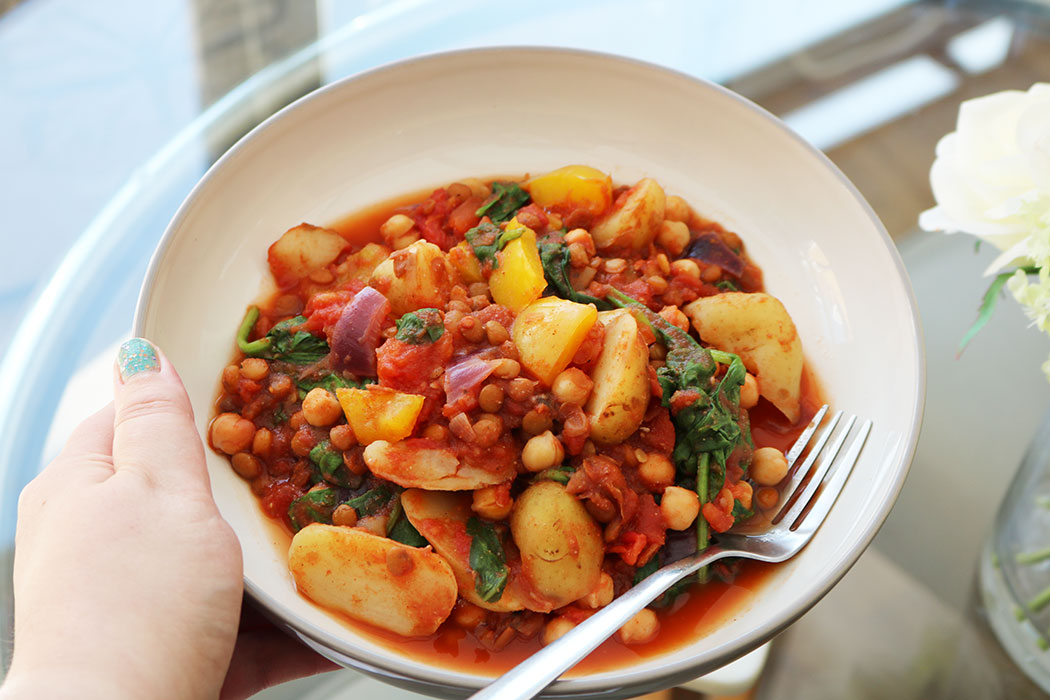 Then all that’s left is to serve and enjoy! The delicious chunks of potato make this a hearty, filling dish that is also super healthy. Pop the leftovers in the fridge and you’ve got enough to last a good few days.

Jersey Royal new potatoes are in season and in Tesco now!

Disclaimer: AD. This post has been sponsored by Tesco Jersey Royal New Potatoes and contains paid for advertorial. All opinions are our own. Find out more about sponsored posts in our privacy policy.

Written By
Becky
More from Becky
Luxury beauty products might be topping your Christmas lists this year, but...
Read More