My love affair with baseball started when Ken Griffey Jnr was playing for the Mariners. In England at the time a new TV channel had emerged and they started to show some Baseball games. Due to the time difference they were on late in the evening/early hours this made it difficult to tune in. Something grabbed me and the coverage was good. There was a mixture of the US stream but there were also some ex players explaining the main points. RBI’s, double and triple plays etc and from that point on I always had a soft spot in my heart for Baseball and dreamed of going to a Yankees game. 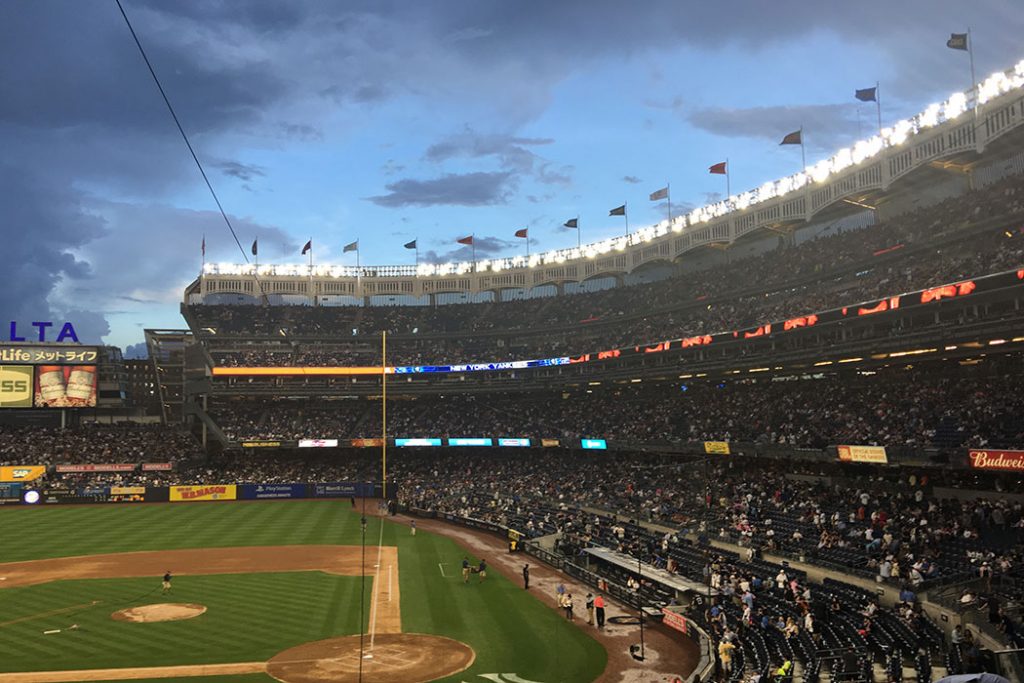 In early 2016 we decided to take a once in a lifetime holiday to New York to coincide with my birthday. We talked up the usual tourist attractions. Agreed on a basic itinerary but one major thing was on my mind – I must see a Yankee’s game. Because it was for my birthday my wife and daughter both agreed. Both seemed up for it, even if just to soak up the atmosphere.

Fast forward to August 2016, and here we were in NYC. We had already ticked off quite a few of the usual tourist attractions. Times Square, The Rockefeller centre and The High Line and the game was getting closer and closer. In the morning whilst watching some TV, I saw some news that would make our evening at the ballpark all that more memorable. A-Rod had decided to retire, and his final ever game would be tonight at Yankee stadium against the Tampa Bay Rays. We planned our day around getting out to the stadium at 161st street, and just did some stuff close to the hotel in the morning. 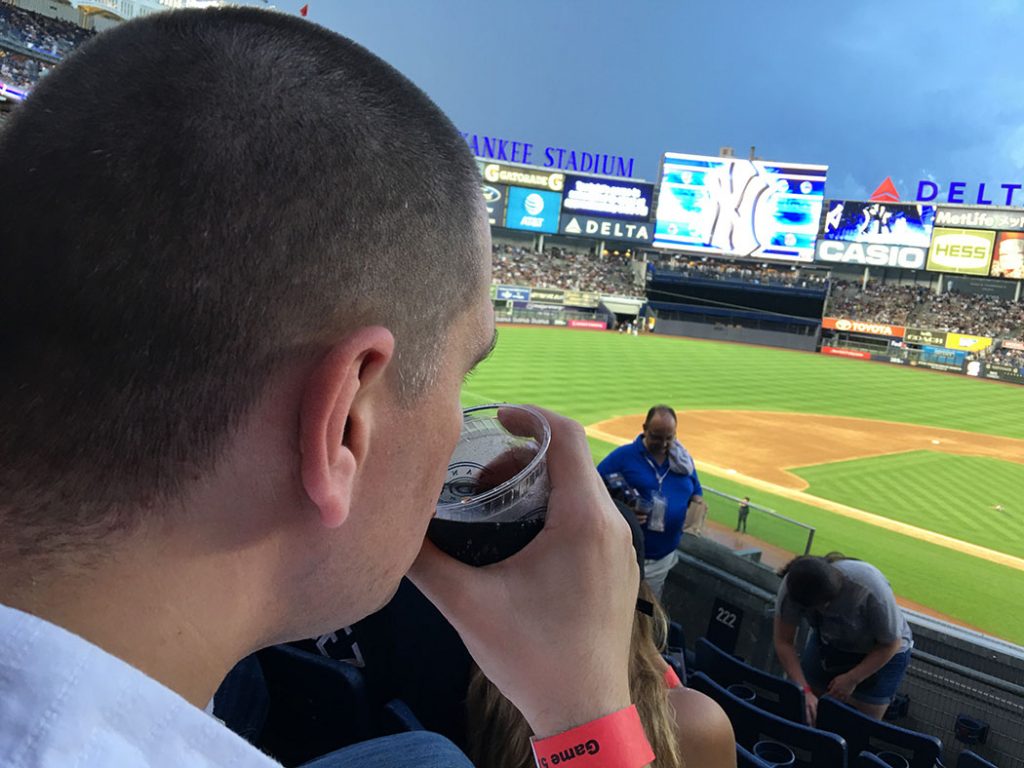 We were quite adept at using the Subway by this point and so decided to utilise that to make our way to the stadium. As you would imagine the trains were busy and packed full of hundreds of Yankee fans also going to a Yankees game  – most wearing Rodriguez shirts. We grabbed a train and arrived at the station. Navigating your way to the stadium is an easy thing to do. Because of the hundreds of supporters we just used them as our compass and followed them down the block. 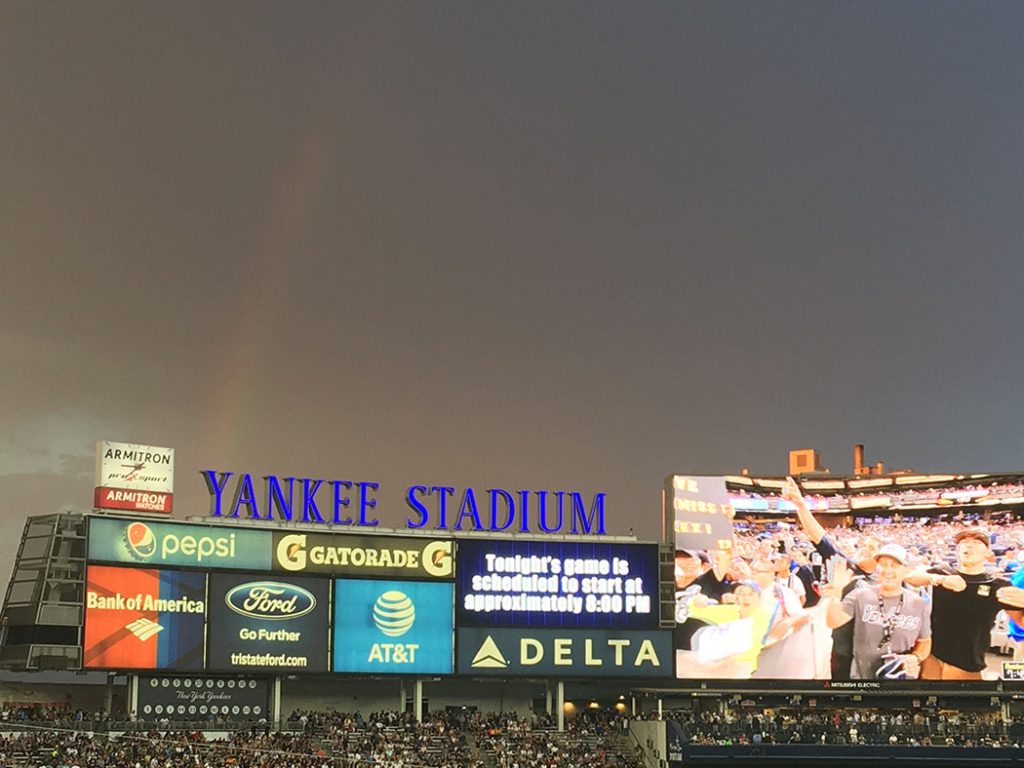 When I first saw Yankee Stadium I was blown away by the size of the place. As vistors we took some time to grab a few shots outside before heading inside to take our seats. We were super lucky and actually had access to the Delta 360 Lounge for the evening. Not only did this give us a fantastic viewpoint from our seats of the whole stadium but also of the pitching mound, sitting just behind home plate. Because of the lounge we also had access to a dedicated food area and bar which certainly didn’t hurt with soaking up the atmosphere. 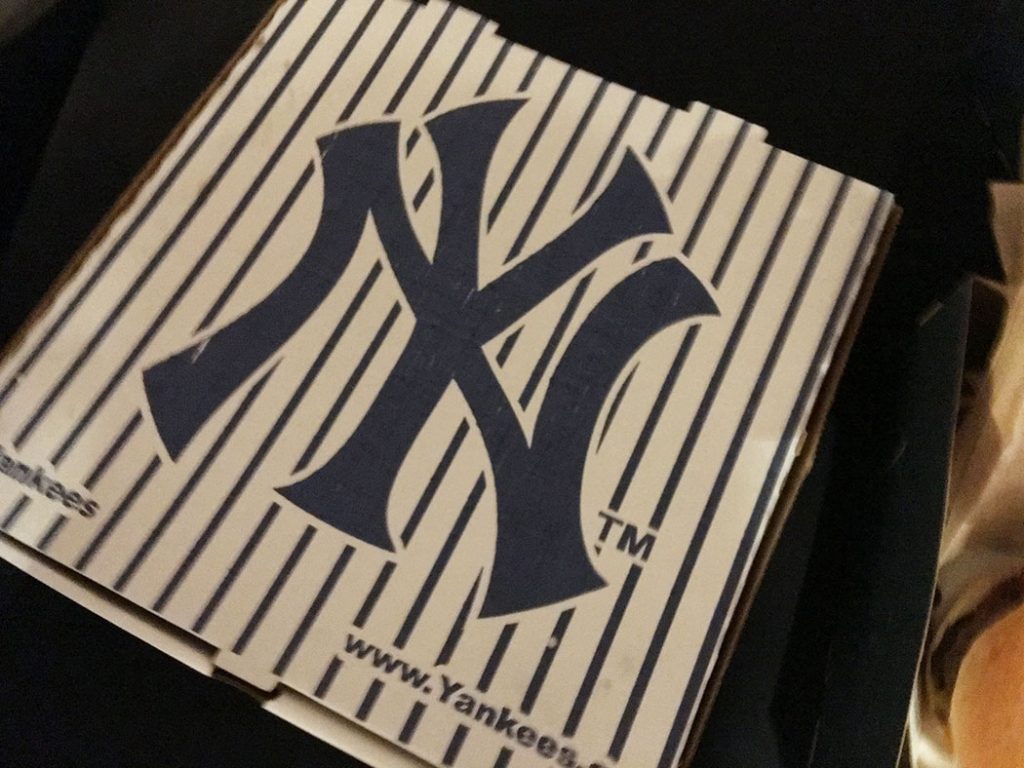 Before the game started there was a presentation for A-Rod’s final game at Yankee Stadium. At that exact moment the heavens opened and everyone rushed for cover, so we only saw that part from the TV screens inside the lounge. We grabbed the food we had ordered and when the rain died down, we headed back to our fantastic viewpoint. Even though it was an evening game it was still hot so we were all glad of a little drizzle and it didn’t last long anyway. 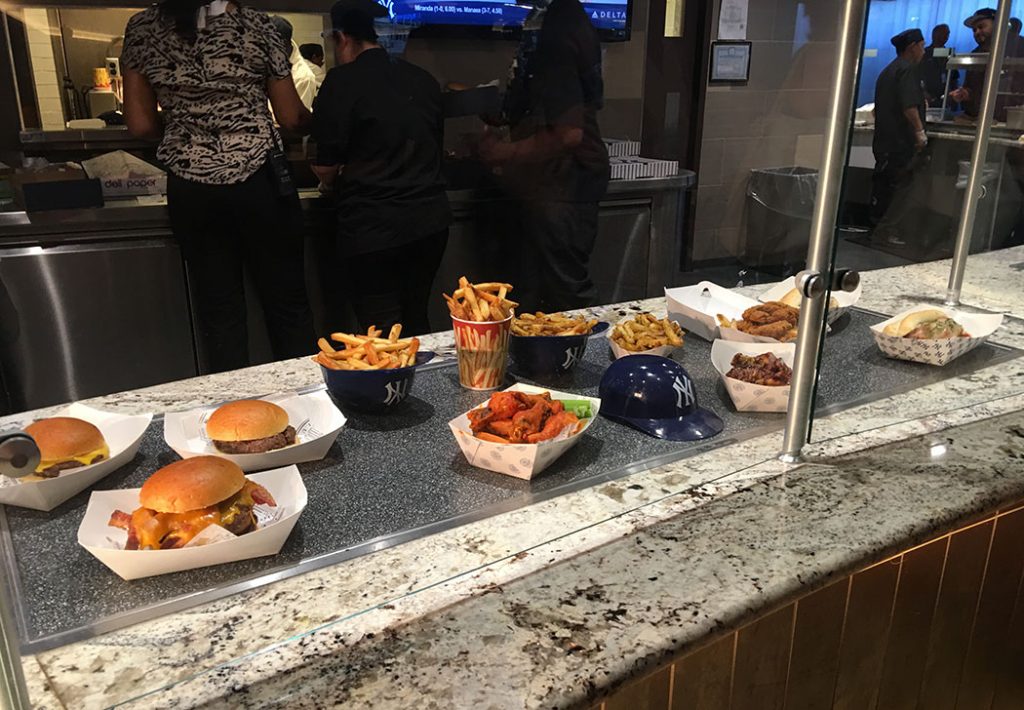 As we settled down to start watching the game I was conscious of the fact that my wife and daughter didn’t know too much about the game. I gave them a brief run down of the rules – strikes, balls, home runs, pitching etc. I figured they would give it a fair chance for my benefit but it wouldn’t be long before they were starting to get bored – how wrong I was!

When the game started to get going, the atmosphere was literally electric. There were some fantastic fans behind and around us. They were chanting and giving banter to the players, their excitement started to rub off on us. Before long we were all joining in with the clapping and singing as the game progressed. I must say more than anything that it felt much more like a family event than I had imagined. Between the innings my wife and daughter were both dragged into the events on the big screen. Watching various patrons get caught out by the camera team, and also all the fun activities that were shown there. Everyone in the stadium also got up and did the YMCA song with the grounds team. My only personal sadness was that I didn’t catch a foul ball, but to be fair how much more can you want from a game of this size. 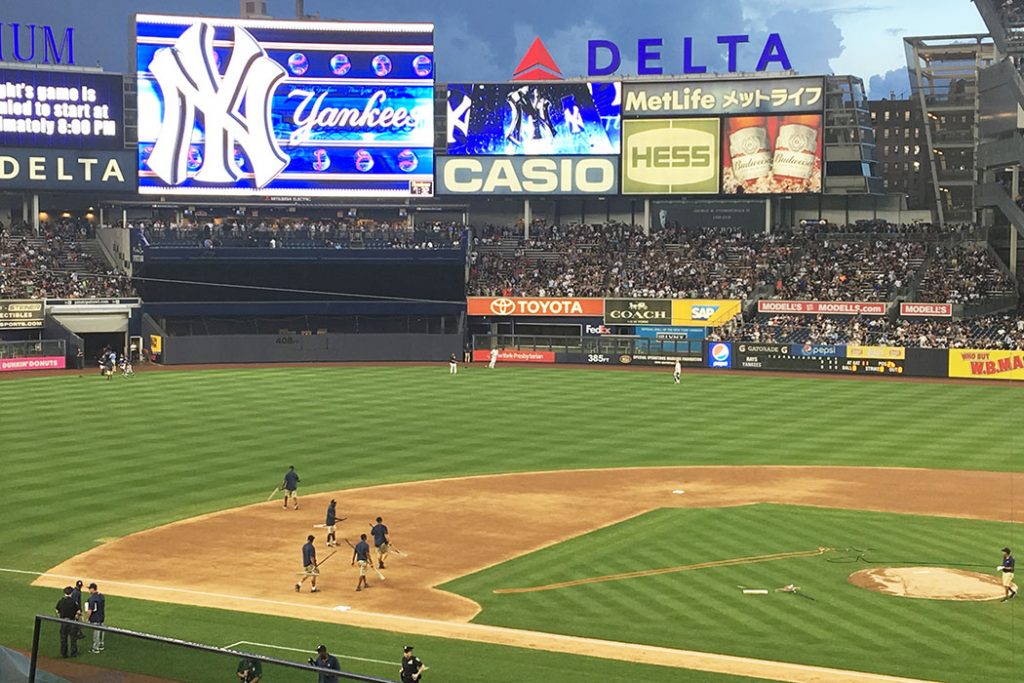 After the game we headed out to the Yankees store to grab some merchandise. To our surprise it was still open – many UK football team shops only open before a game and closed when you exit, even though most games finish at 5pm. There were walls of caps and memorabilia and the staff were helpful with any of our queries. Laden up with all our goodies we headed back to the subway and our hotel, with some amazing memories.

The game was fantastic from all our perspectives. The view, the sights and sounds but also a big shout out has to go to the friendly and amazing Yankee fans and staff. They brought a magical night together that none of us can stop smiling about. If you head to New York and want to have a fantastic experience.

Going to a Yankees game is something you absolutely must do if they are in town – you will not regret it.

If you enjoyed this feature then check out the rest of our Adventures in New York series below:

Travelling to New York | Adventures in New York Part One