Lego dimensions news – The gaming world has been progressing a lot over the last year, especially when the PS4 and Xbox One got released. Gamers have come to expect a lot from their video games great story-lines, graphics, easy controls and the ability to game the way they want to play it.

Children love to play pretend that their toys are alive and when Skylanders was launched it was a massive success with players being able to do exactly that. With a main game to play and loads of toys to buy, that can be brought into your virtual world with the use of some clever tech.

Skylanders have since brought out a new pack called swap force. This new variation allows you to mix and match your toys and then play them in the game giving you more control of your character on what they look like and what abilities they have.

Both Disney and Nintendo have developed similar games. Disney brought out Disney Infinity where you can collect Disney figures and play them in the game. Disney recently acquired Marvel so now you can take the superheroes you love and pit them against your favourite Disney characters.

Nintendo followed with Amiibo which is a different twist. The figures can do different things depending on which compatible game you use them on. For example in Super Smash Bros you may be able to play as your character but if you use it on Mario Kart it unlocks new costumes for that character in the game.

None of these titles could be called cheap as new figures come out all the time. Well PARENTS BEWARE as a new game is due for release later this year and this time it involves one of the biggest toy companies in the world LEGO!!

Lego has been on top of the toy charts for a long time, letting kids using their imagination and being able to build almost anything from their tiny plastic bricks.

Lego has also made loads of deals with other big franchises by making Lego toys of them. Lego Star wars probably being one of their biggest hits. They then teamed up with Tell Tale games to develop video games using again popular franchises but in the cute Lego form.

The games were very clever with the main objectives being to collect Lego to unlock new levels, new characters and vehicles. The levels were then re-playable with the different characters you unlock allowing access to areas unreachable before.

Last year on February 1 2014 Lego made their first big screen film using their own characters and other franchises mixing them together for the first time.

This week Lego have announced Lego Dimensions!! A new video game similar to that of Skylanders where you can buy compatible Lego Toys and place them on the special portal and take control of them in the game.

The difference with this is that you can mix some of your favourite characters from different brands together. DC, Lord of the Rings, Back to the Future, Lego Ninjago, Wizard of Oz and The Lego Movie have already been confirmed. Meaning that if you feel like being Gandalf driving the delorean down the yellow brick road with Wonderwoman flying beside you, YOU CAN.

The Starter Pack includes 3 characters: Wyldstyle (The Lego Movie), Gandalf (The Lord of the Rings) Batman (Its Batman for heaven’s sake, everyone knows where he’s from). It also comes with the Batmobile, the portal that links the toys to the game and of course the game itself. It doesn’t come cheap mind with the rrp for the pack on Wii U, PS3, Xbox 360 being £89.99 and for PS4 and Xbox One £99.99.

Expansion packs are going to be a big part of the game with three different packs being available to buy which contain different items. 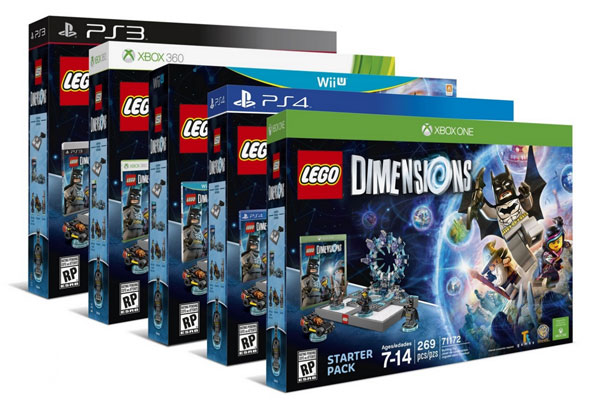 Few of the expansion packs have been announced with more to follow from now till the 27th September when the game is due to be released. Then more expansion packs will be made available right into the new year.

From the trailer we can see the story is about a villain tearing holes in the different Lego dimensions. Gandalf, Wyldstyle and Batman will have to travel between the dimensions to help rescue their friends.

The games main slogan is Break the Rules putting the emphasis on being able to mix these worlds and characters and with Lego’s vast range this will be a big game.

Lego is also making new deals with different companies which could change the game drastically. Lego are currently developing Lego Dr Who and a rumour has emerged that the Doctor will make an appearance with his Tardis in the game.

I’m very excited about this game, being a fan of the old games and loving some of the characters they have involved. I am however aware of the pricing – when you buy the starter pack and all the announced expansion packs it will cost a whooping £350.44. Though it isn’t necessary to buy all these it can be very hard to explain that to a child big or small.

People that know me know that i have an obsession with both Batman and Dr Who. If this game gives me the opportunity to put the two together it will become a SHUT UP AND TAKE MY MONEY situation. Possibly resulting in my wife devising ways of torturing me for wasting money. Though I’m positive this will be well worth every penny wont it. Wont it. WONT IT????

Watch the trailer below and see what you think.

London boy now living in Somerset with his lovely wife and his cats. Contributor to Lifestylelinked and all round entertainment nerd.

I don’t know about you, but I’ve always thought about what it would be like to have my own personal stylist. Imagine having someone…