As a musical theater fan, I must admit that it took me a longer than it should have to find out about the acclaimed Lin-Manuel Miranda musical, Hamilton. I first learned about the show when researching musicals to see on our visit to NYC last summer. New York had been on my travel bucket list for as long as I could remember and our whole family desperately wanted to take in a Broadway show whilst we were there. After looking into how to get Hamilton tickets and realising we stood no chance (Hamilton is one of the hardest shows to get tickets for) we ended up seeing Phantom of the Opera on Broadway which was still absolutely amazing.

The Broadway cast recording – I still had Hamilton at the back of my mind when we returned back to the UK though, and decided to give the original Broadway cast album a listen on Spotify to taunt myself with what we were missing out on. I mean, after all of the hype – it had to be something pretty special to be gaining this much attention all over the world. So I played the first few songs…. and that’s when the obsession became real. That’s when I think I might have actually realised that Lin-Manuel Miranda is a fully fledged, modern day genius. 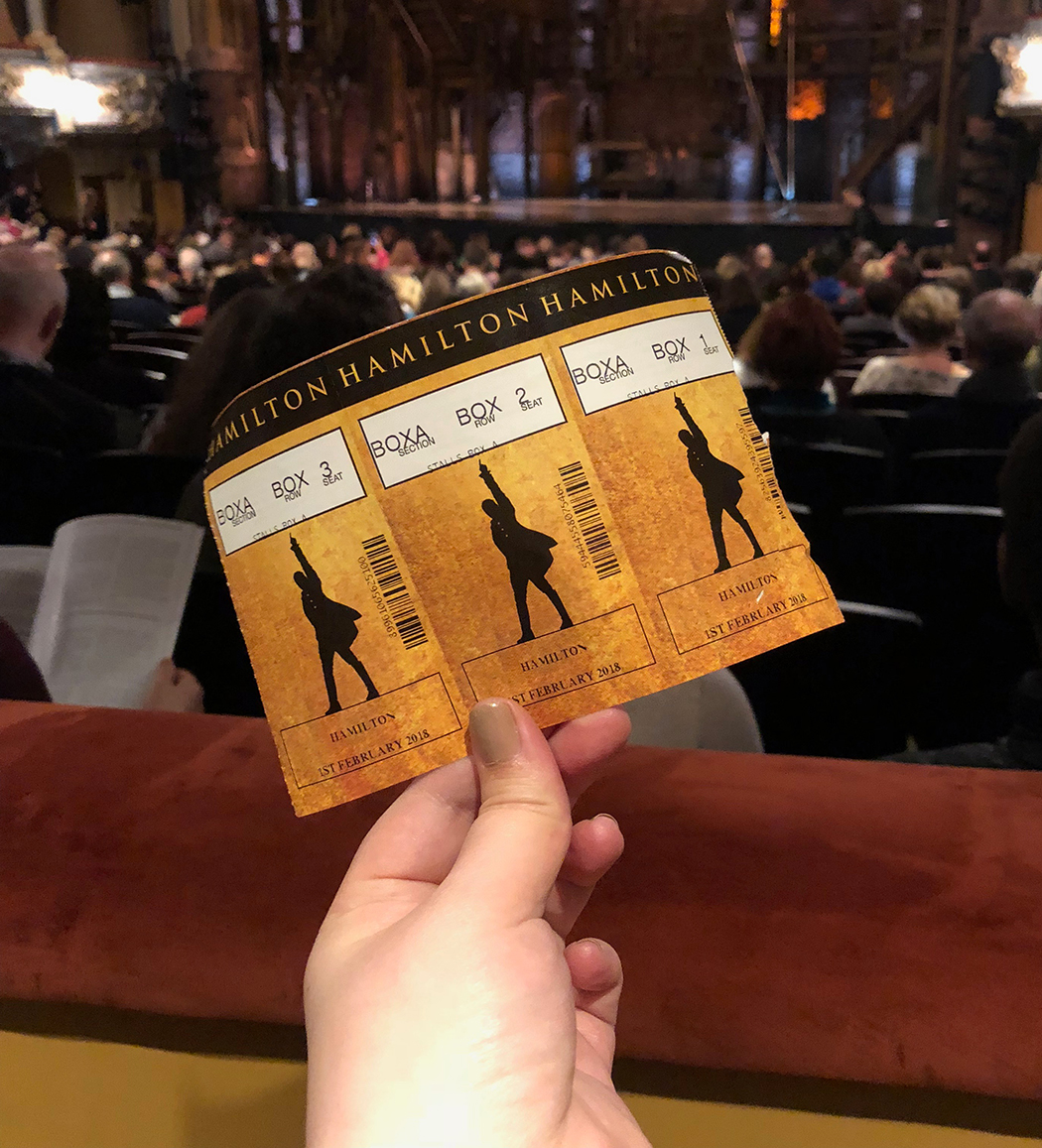 When we heard that the show was opening in London, it became our mission to get tickets. Hamilton tickets are still pretty hard to get even here in the UK, but by some strange twist of fate we ended up getting some for the start of February 2018. Better yet? They came with our own private box and butler service – insane! We booked it as a birthday treat for my teenage daughter who by then had already learned just about every word to every single song and was obsessed.

What was Hamilton actually like on stage? – After watching Hamilton I am so glad that it lived up to every expectation we had. We’d put this show on a pedestal and it did not disappoint. The energy on stage, the casting, the choreography, everything was worthy of every ounce of praise you hear. It has to be experienced in person to be believed. The Victoria Palace Theatre in London is beautiful, the stage is jaw-dropping and the atmosphere is electrifying. I’m not going to say too much more as trust me, you really do need to see this one for yourself. 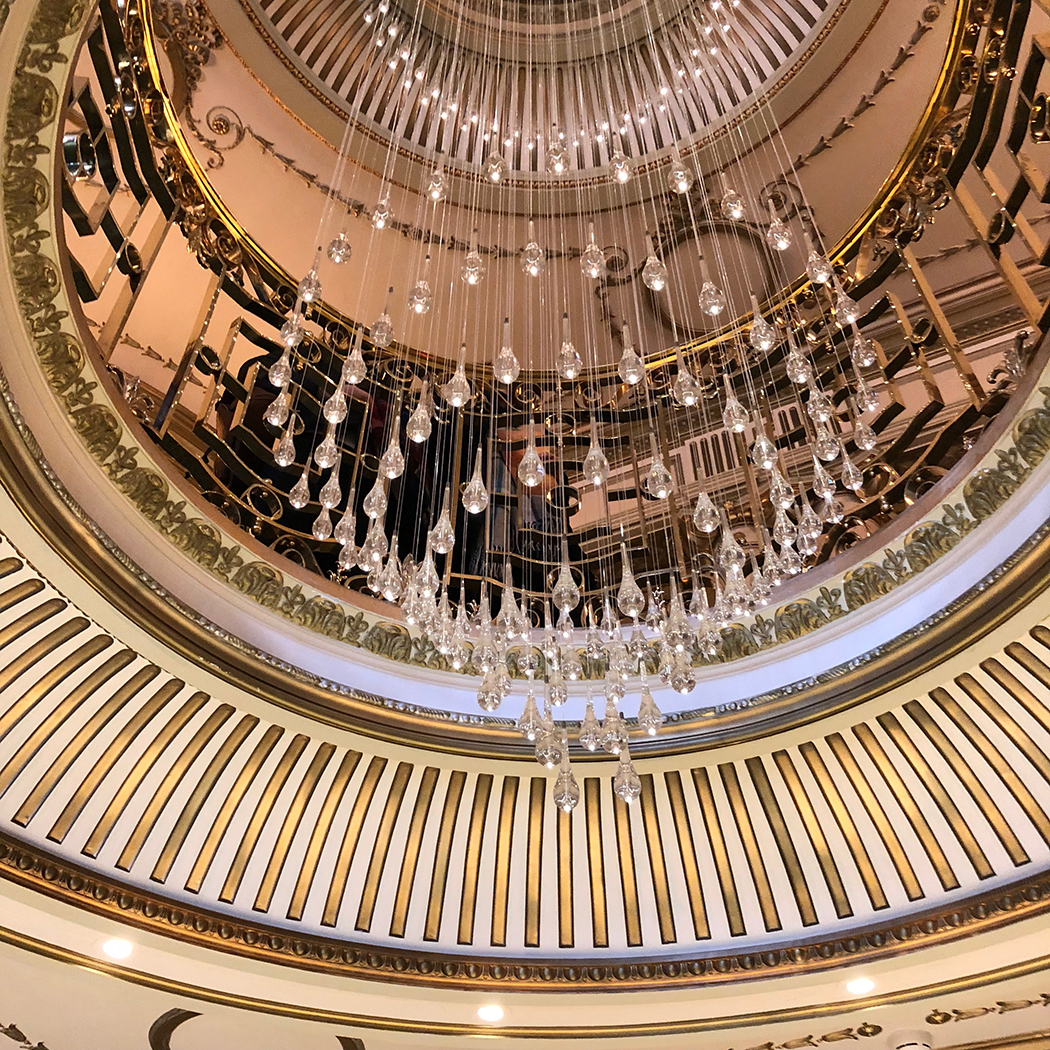 So what makes Hamilton so special? Why has it resonated so astoundingly hard with me, my whole family and so many other people around the world? Here are some of the many ways that Hamilton has impacted my life. Has it had a similar effect on you? Leave a comment below or message me on Twitter and let me know. Warning: there may be spoilers from the show ahead….

1 – The excitement of discovering Hamilton

From the first day I listened to the Hamilton soundtrack, I knew that this was something special and that my teenage daughter would appreciate it too. It was early evening and she was upstairs watching TV in bed. I ran up and quickly played her snippets of two songs. The first was the opening track ‘Alexander Hamilton’ which immediately grabbed her attention and then ‘It’s quiet uptown’ which she fell in love with just like I had. A few minutes later she had switched the TV off and we were listening to all of the songs together. It soon became apparent that we were going to need to learn all of the lyrics. Immediately. It just has that effect on you!

As some of you who have been reading here for a while may already know, I’ve had my fair share of experiences losing loved ones and of dealing with extreme grief. My husband and I lost our baby son and then went on to lose my father, all within the space of just a few short months.

The track ‘It’s quiet uptown’ hit me hard. It shows a husband and wife dealing with the loss of a child with such powerful and raw emotion. With lyrics like the below, you can see why it is so hard hitting and the last line in bold is so true for many of us in various different situations:

There are moments that the words don’t reach, there is suffering too terrible to name.  You hold your child as tight as you can, and push away the unimaginable. The moments when you’re in so deep, It feels easier to just swim down

With so many moments like this that grab you and really speak to you throughout the course of Hamilton, you find that it gets under your skin in the best possible way and really ensures that you care about the characters and what they have to say. When Eliza sings ‘Burn’ earlier on in the show, her anger resonates with any woman who has ever been wronged and her words and passion are impossible to ignore.

3 – Inspirational lyrics and quotes to live by

It’s not just ‘It’s quiet uptown’ that has some of the best and most meaningful lyrics. The whole of Hamilton is filled with many different quotes and messages for life that can be applied to how we live. One of my favourites is quite simply:

Who lives who dies who tells your story?

There’s nothing more real than the thought that we might not be remembered when we’re gone. Who will tell our story when our time is up? Who will ensure that we are remembered for the things we’ve achieved? It is through the people’s lives we touch and the connections we make that we live on – it will be these people who keep our memory alive and will go on to share stories of those funny moments, the big accomplishments and everything in-between.

In Hamilton, Alexander always ‘Wrote like he was running out of time’ and that’s something I can really connect with. Other meaningful quotes that I  find inspiring or that speak to me in some way are:

“Look around, look around, at how lucky we are to be alive right now”

“If you stand for nothing Burr, what’ll you fall for?”

“I’m past patiently waitin’ I’m passionately smashin’ every expectation. Every action’s an act of creation!”

“I am the one thing in life I can control. I am inimitable, I am an original.”

“I don’t pretend to know the challenges we’re facing. I know there’s no replacing what we’ve lost and you need time. But I’m not afraid, I know who I married. Just let me stay here by your side. That would be enough.”

“When you’re gone who remembers your name? Who keeps your flame? Who tells your story?”

I also love how the Schuyler sisters are some of the strongest in a musical. Both Angelica and Eliza have their own moments to shine. They are strong and passionate. These women have such a huge role in Hamilton. It’s not just Alexander who is driven by his aspirations in life. I love that my daughter is watching theater productions like Hamilton and learning just as much as she is entertained.

I’ll leave you with the below video of Emma Watson interviewing Lin-Manuel Miranda. I absolutely love this as you can see just how passionate Emma is about the show. This video is definitely worth watching in full!

You can still get Hamilton Tickets from: Ticketmaster.co.uk as a new booking period has now been announced. It’s worth searching as many dates as possible to find the best seats at your price-point!

Disclaimer: please note that unless otherwise stated some items featured have been provided on a review basis and affiliate links are present. All images taken by us remain copyright LifestyleLinked.com and Rebecca Bowden. Please contact us before using elsewhere.