Estrella Damm, the ‘beer of Barcelona’, is bringing a taste of the Mediterranean to the UK this summer with the launch of a series of limited edition packs inspired by the city in which it is created. The packs feature exclusive tapas recipes by world renowned el Bulli chef, and Estrella Damm ambassador, Ferran Adrià, as well as original designs by celebrated Catalan designer and artist Martí Guixé.

Ferran Adrià (founder of world famous restaurant el Bulli) and his brother, Albert, co-own the world’s best tapas restaurant, Tickets (www.ticketsbar.es) in Barcelona, and worked closely with Estrella Damm to create eleven original and exclusive tapas dishes inspired by the beer’s refreshing taste and unique flavour. Each of these recipes is featured on a limited edition Estrella Damm four pack including recipes such as tuna belly and tomato salad, codfish fritters and grilled red pepper, so you can create a tapas feast with a touch of Ferran Adrià’s unique Mediterranean culinary style at home. 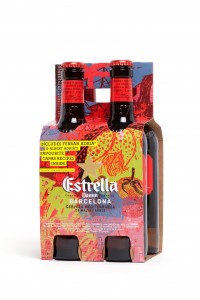 Guixé was tasked with visualizing and bringing to life the Mediterranean lifestyle on the Estrella Damm packs; influenced by gastronomy, art and culture, he has captured the sentiment of those who enjoy life and enjoy Estrella Damm.

Estrella Damm is an award winning, premium pale lager renowned for its refreshing, clean taste and vibrant flavour – the taste of Barcelona. Today it is brewed by the eleventh generation of Master Brewers who still follow the distinctive original recipe created in 1876, with ingredients such as pearl rice, a distinctive Mediterranean ingredient characteristic of Estrella’s unique flavour.

The limited edition Estrella Damm packs are available now for £4.99 per pack of four bottles in selected retailers until October 2013.